So far we have talked about being present for our own emotions. And how to deal with them. But what if you are listening to someone, or being in the neighborhood of someone who is experiencing intense emotions, maybe even directing them at you? In my experience this is even more difficult.

Sometimes people who are hurt, sad or angry complain that the one they are telling their story to, is not listening the way they need, or is not supportive enough. What is easily forgotten is that one who is listening might not know how to listen in a helpful way and might have their own emotional reaction to the situation as well. Very often it is expected of us that we are good listeners but listening is a skill that needs practice and the willingness to be vulnerable.

When we are not comfortable with our own emotions, it is very difficult to be comfortable with other people’s emotions. If we hold judgements about expressing our own pain, fear or anger, we will probably want to fix other people’s pain as quickly as possible. So that it is no longer there, and we will no longer be confronted with our own discomfort.

We are not to blame for not being able to deal with pain. We haven’t had many good examples to learn this skill from. Even when little children are hurting or crying, most people would rather give them candy or some other distraction so that they stop expressing their pain. We are so uncomfortable with other people’s distress, that we are often not able to endure it and stay present.

In our culture, difficult emotions are not very popular. They shouldn’t be there, and if they arise, they should be fixed or gotten rid of as soon as possible. Emotional pain is often seen as weakness and the person suffering from it often feels ashamed to show this pain.

Let’s say somebody close to you is severely ill and experiences a lot of anxiety. That might trigger worry or anxiety in you as well. Let’s say that person is feeling so bad, that he or she will not have the energy to be kind to you. What emotions does that trigger in you? What if your partner experiences a lot of anger because of something you did. Will you feel angry in return, or defensive?

The emotions that are being triggered in us by other people’s pain, are for us to heal ourselves. So it all starts with us.

Okay, this makes sense in theory, but how do we practice this? This has long been a stumbling block for me. I had the intention to be there for another person, I had some experience in mindfulness and dealing with my own emotions. But when other people’s emotions would trigger unhealed stuff in myself, I didn’t know how to deal with that. Because I was no longer centered. My attention would be with the other person, and no longer with my body and breath. 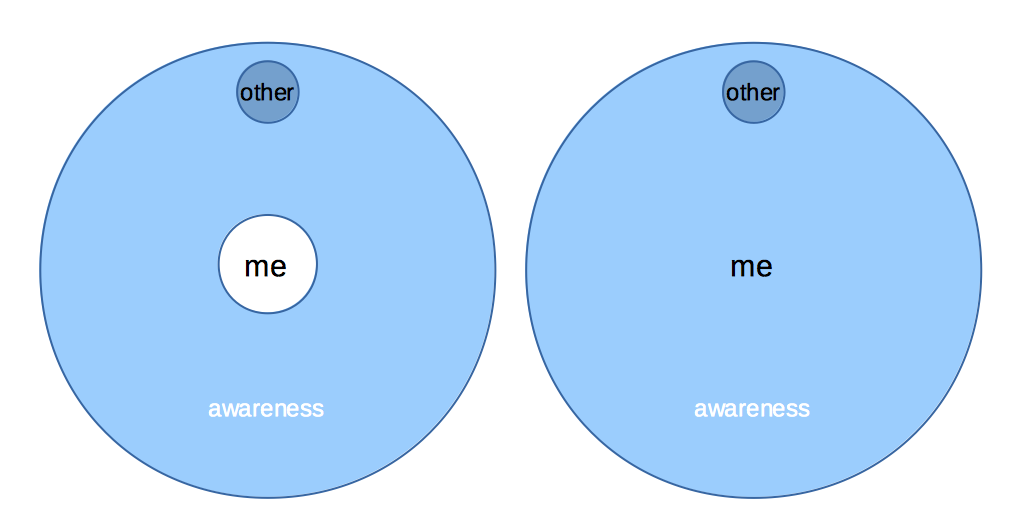 In the image above I try to explain what I mean by ‘centered’. I used to place my awareness outside of my body into the world. I would be focused only on what what going on in the outside word, and would no longer be aware of myself.

Another stumbling block for me was the fear that I would not know what to say. That kept me trapped inside of my head, where I would have to deal with my need to fix the other person. I would approach the story of the other person in an analytical way, focusing on the content of the story instead of the emotional aspect.

Being there for someone requires of me a willingness to be vulnerable and okay with not knowing what to say. The willingness to be clumsy, but authentic. This can be rather scary if you believe that a certain response is expected of you. That you have to say the right thing. Over time I experienced that being truly present with someone is more valuable that knowing what to say. Where I expected awkward situations, they never really happened, and as I relax into the moment, usually words just pop up without thinking.

There is an English expression: “Holding space for someone”. It is something I cannot translate into Dutch. But I interpret it as being present for someone (or for yourself) in a non-judgemental way. In the image on the right side, the awareness is the space that I hold. In my imagination I fill this space with love and acceptance for myself as well as the other person. All that arises in the here and the now will fit in. The emotions, the vulnerability, the not knowing and the awkwardness.

Learning from and with others

When you have the intention to learn to be present for someone in pain, you don’t have to practice alone. I learned so much from the people in my sangha. My sangha is a community of people that practice a form of Buddhism founded by Thich Nhat Hanh, a Vietnamese Zen master. Once a week we come together to meditate and to share our experiences with the practice. Sometimes painful emotions arise for someone in our group, and we practice holding space for each other. We don’t respond with words, just with our presence. The presence of a sangha is very healing. The one sharing his or her emotions often gets valuable insights, just from being able to share. The ones listening receive insights as well, because we all share our humanity and recognize a lot from other people’s stories.

You don’t have to have a sangha to practice. It can also be a group of friends, or a support group. It can be very valuable to learn from each other.

Being gentle with yourself when practicing

I have felt very guilty in the past when I was not able to listen in a supportive way. What made it worse was that I thought that I should master this already and that everybody else was able to listen like this. I have realized that supporting someone emotionally is not easy, but it can be learned if you are willing to practice, fail, and try again. Be gentle and forgiving for yourself!