We have been taught to love other people. And there is definitely nothing wrong with that. But how about loving ourselves as well? Can we even love others in a healthy way when we don't love ourselves?

As human beings it is natural to want to belong, to be loved and accepted by others. As children we were brought up with many messages about what is acceptable and appreciated, and what is not. By our parents, by our teachers and in general by the culture we grew up in.

The thing that touches me the most when I see it in other people, is lack of self-love. And I don’t mean a narcissistic kind of love like “everybody see how awesome I am”, but a basic feeling of being good enough. The realization that it is important to be kind to yourself and forgiving.

And to be honest, loving ourselves is not something we have learned in kindergarten. We all know the messages that you have to think about others first, that giving is better than receiving and we learn to be afraid of being ‘selfish’. On top of that we are living in a culture of gossip, where we often hear people talk negatively about the so called flaws of others. So we learn to hide parts of ourselves and we post happy pictures on social media to show others how well we do in society.

The fear of being ‘not good enough’ can cause much suffering and has a negative ripple effect. It makes you interpret other people’s reactions in a negative way. In a way that confirms the feeling of being flawed. This will cause a closing of the heart to protect yourself from being hurt, which other people will perceive in a negative way. And then it comes full circle. The people who’s judgement you were afraid of most likely also experience a lack of self-love. And so they will see their fear come true as well. The fear of not being liked by others.

This vicious circle will keep everyone involved trapped into a feeling of separation that eventually can lead to shutting other people out. We will then see very unbalanced behavior focused on self preservation, like saying ‘me first’, or ‘my group first’ etc. without considering the needs and feelings of other people.

So I think it is crucial to come to terms with all the things that make us feel unworthy or less than others. Let’s turn a negative cycle into a positive one. The more we lovingly accept the shape of our body, our ethnicity, our sexual preference, our autism, ADHD, or other neurodivergence, our handicaps, our personality, the more we will be able to lovingly accept other people and not take it personal when they are having a bad day. The most loving people I know are the ones that accept themselves with kindness and self-compassion.

It takes mindful practice and dedication to come to terms with the parts of ourselves we have learned to hide. Let me tell you about a trait of mine that I have learned to be friends with, but that can still pose a challenge every once in a while.

Most people take their ability to recognize faces for granted. I have trouble with that. I have a mild form of face blindness. This means it takes several interactions over time with someone in order for me to recognize his or her face. One meeting won’t do. And even when I am able to recognize somebody’s face, I easily mix people up that have similar faces.

This can cause embarrassing situations, or hilarious depending on the point of view. Once I was in a meeting with two men in suits. (The fact that they were wearing suits makes it more difficult for me to recognize people by their clothes.) We had been in that meeting together for more than an hour before they left. Five minutes later one of them came back because he forgot something, and I greeted him like I saw him for the first time. I totally didn’t recognize him. When I found out about my mistake, I wished the ground would swallow me up.

Not long ago I was standing in the elevator with somebody from my company. Someone I have talked to several times, but not someone I work with directly. I mistook her for another person that looks a bit like her. I was surprised she had shorter hair and I almost wanted to compliment her for her new hair style, but I bit my tongue because I wasn’t 100% sure she was the person I thought she was. And I was lucky I didn’t say anything, because I indeed mistook her for somebody else.

I could give you many more anecdotes, and after a while I can laugh about it myself. I try to compensate for it by focusing more on someone’s haircut, clothing style, voice or way of walking.

Having this little handicap can make me seem rude or silly as well. I might not recognize you on the street and thus not greet you appropriately. Or I might introduce myself again after having talked to you half an hour ago at a conference for instance. Or not introduce myself at all, because I assume we have met already. Really awkward.

Turning the feedback loop around

My face blindness makes it more difficult for me to manage the impression I make on other people. So it can very well be that some people that I don’t know that well yet, will be confused or maybe even offended by my (lack of) reaction to them.

Although this has bothered me in the past, it has also taught me a valuable lesson. I have limited control in how people perceive me. The way people perceive me is largely determined by how they perceive themselves anyway. I have, however, full control in how I perceive myself. So I decided to turn the feedback loop around and instead of looking at others for approval, I look at the intention behind my actions. I choose to trust that whatever energy I send out into the world will come back to me somehow.

Sometimes I notice that my ego got in the way. That I wanted something from the other person, be it attention, admiration, approval. I can then take responsibility for a sub-optimal outcome which will not come as a surprise to me.

Other times I notice that it was my intention to just be kind and accepting, not needing the other person to respond in a certain way. And then I let go of the outcome. Maybe they like me, maybe not. But it was the best I could do at that moment.

And still other times I notice that I was setting firm boundaries, but not out of fear but out of self-care, or care for others. I am then at peace with whatever reaction I get, because my intention was one of love and not of fear.

I still flip back into self-doubt every once in a while, but when I catch myself doing so, I can always return to my breathing and remind myself of my original intention.

I know it sounds easy when I put it like this, but it is not. We have a lot of negative conditioning to un-do. It can be quite painful to recognize how you have been sabotaging yourself for most of your life. But re-learning to love ourselves (and others in the process) is the most valuable and rewarding path we can choose. 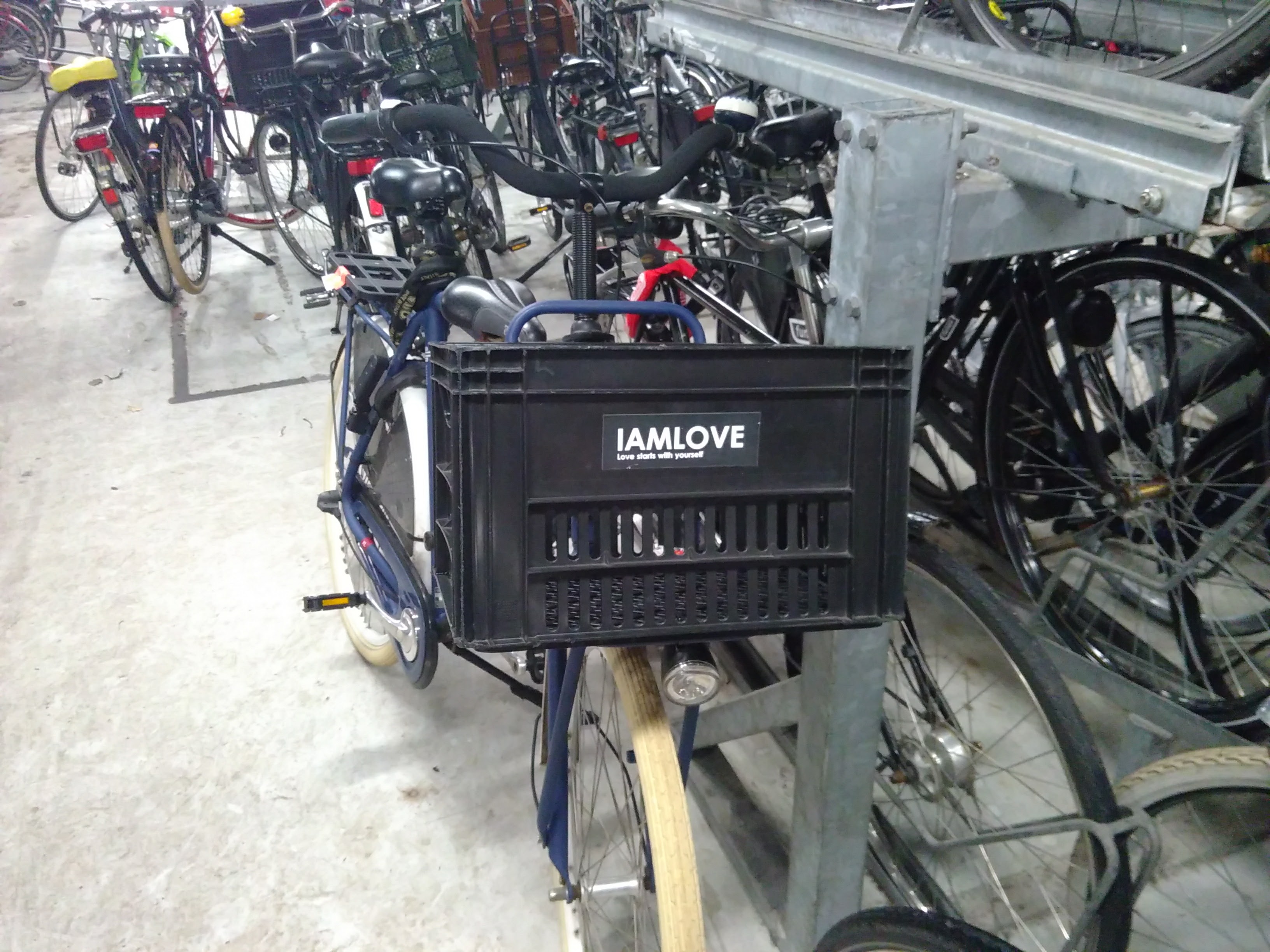 The other day I saw this sticker on a bike and I couldn't resist taking a picture. It says

"I am love. Love starts with yourself"

A nice reminder that we are not practicing alone 😊